My Favorite Things to Do in Kuala Lumpur, Malaysia 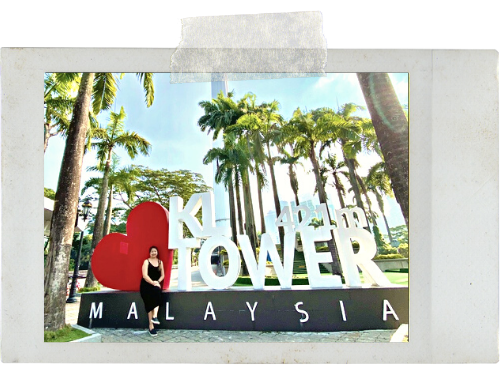 My first view of Kuala Lumpur after getting settled at the Traders Hotel was of the iconic Petronas Twin Towers. From my hotel room, I was mesmerized by the unobstructed view of the Petronas Twin Towers and KLCC Park. I was tired from the flight from Thailand, but had a big shot of energy seeing one of the Malaysian landmarks I had on my travel shortlist!

Both the towers and the park were adjacent to the hotel, as well as the Suria KLCC Shopping Mall with a big food court and restaurants on the basement floor. So, after a quick freshening up – I set out on foot to explore the grounds.

The Petronas Twin Towers are the tallest twin structures in the world at 1482 feet (452 meters) tall with 88 stories. Both towers joined at the 41st and 42nd floors by a 190 foot (58 meters) long, double-decker Sky Bridge. The observation deck is on the 86th floor where you can get a close-up view of the tower’s spire and an exhibit of the tower’s history.

The towers resemble an eight-pointed star (when seen from the top), which represents unity, harmony, stability, and rationality in Islamic cultures. The designs and patterns in the entrance foyer reflect Malaysia’s traditional handicrafts and “songket”, or weaving.1

Surrounding the towers is the KLCC Park with jogging and walking paths, a large fountain that lights up for a show each night, and the entrance to the Suria KLCC Shopping Mall. The stores in the mall are similar to those you would find anywhere. The main draw for me was the food area on the basement level with lots of choices to eat and a small grocery store for fruit, snacks, and drinks.

The Menara KL Tower is one of the most recognizable and popular landmarks in Kuala Lumpur. It’s the seventh-tallest communication tower in the world at 1381 feet (421 meters). There are two viewing areas: the enclosed observation deck at feet 905 feet (276 meters) and above it, the main attraction is the outdoor sky deck is at 984 feet (300 meters) above ground level. Both have crazy panoramic views of Kuala Lumpur.

The overall design of the KL Tower was meant to represent the human journey for perfection in life. A Malaysian spinning top was the inspiration for the pinnacle of the structure where you’ll find a revolving restaurant, Atmosphere 360. There also are shops, a cafe, and a pizza joint, among other things.

KL Tower is a communications tower built atop Bukit Nanas (Pineapple Hill) Forest Reserve, one of the oldest forest reserves in the country. Visit the reserve to see tons of flora and fauna in an unexpected place – surrounded by a skyscraper-filled city.

The Batu Caves is a 400 million-year-old limestone hill made up of three major caves and a bunch of smaller ones.

The first temple was built in 1891 and “Thaipusam”, the Tamil Hindu festival devoted to the Hindu deity Murugan, was first celebrated on the site in 1892. Now Thaipusam is a major event that attracts hundreds of thousands of pilgrims annually to the Batu Caves.

The Batu Caves is about 15 minutes North of KL by car. To get to the actual caves, you must climb 272 colorful steps, painted in August 2018. It’s hard to imagine the steps plain! I think the rainbow colors help encourage you up the hill, especially with the humidity.

Don’t forget to bring water and take your time – it really only takes about 20 minutes or so to get up the stairs so go get those buns of steel! Watch out for macaque monkeys that will come for you if you have any type of food out.

The Temple Cave (also called Cathedral Cave) is right at the top of the staircase. Below the Temple Cave is the Dark Cave that is sometimes closed to visitors. The Villa Cave contains the Art Gallery Cave and Museum Cave filled with numerous Hindu statues and paintings.

Constructed in 1894, the Sultan Abdul Samad Building was created for government offices. The Moorish-style architecture made it stand out for me as a sucker for arches and spiral staircases. Its made almost entirely out of brick – four million of them – and has a 135 foot (41.2 meters) tall clock tower.

The building is a major historical landmark in KL and currently houses the Ministry of Information, Communications, and Culture of Malaysia. It previously contained the superior courts of Malaysia: the Federal Court of Malaysia, the Court of Appeals, and the High Court of Malaya, before they moved to Putrajaya.

2D Cafe can be found in Selangor – just 15 minutes by car, outside of KL city center. It’s on the top level of a small mall and it is easy to miss if you’re not looking for it. You can enjoy bubble tea, smoothies, and some food while having fun at the 2D experience.

The capital city of KL is a mix of modern and traditional. Its main hub is called the Golden Triangle which comprises Bukit Bintang, KLCC, and Chinatown. There are many places to explore from temples to the Royal Selangor pewter factory to watching silk scarves be handpainted and of course great food everywhere.